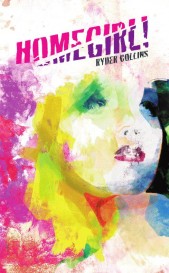 Homegirl works in a café & doesn’t know what she wants. Homegirl does live-living things like dating Punkboy and Richboy but doesn’t know who she wants. A creepy creeper named Shadow knows he wants Homegirl. A Craig’s List witch knows she wants Richboy. & the café bitches are always forever knowing they want the one you want cos that’s just how they roll… Homegirl don’t care about any of them; she’s out for love and vengeance and gots a Glock in her boot to prove it.

“Think of a cross between Nabokov and Mary Gaitskill, Lady Gaga and Jeanette Winterson, A Clockwork Orange and Tropic of Cancer, Umberto Eco and Quentin Tarantino, Dostoyevsky and Courtney Love. Ryder Collins’ Homegirl! is übersmart, belly-laugh hilarious, militantly raunchy, unselfconsciously punk, and inexplicably heartbreaking. The epitome of post-postmodern—drenched in the contemporary, yet like nothing you’ve read before. You won’t want to miss a word, won’t want to put it down, and when you finish it, you’ll want to start all over again.”

K. L. Cook, author of Love Songs for the Quarantined and Last Call

“In both her poetry and her prose, Ryder Collins is formidable in her ability to construct associative narratives that hook readers like so many gaping, unsuspecting fish, reeling us in only so far with a combination of well-timed jerks of insight and the slack of easy-flowing lyrical rhythm — then as suddenly as we’re caught, she throws us back, free, a little unsettled, and more appreciative of our surroundings. In Homegirl!, her debut novel, Ryder Collins breaks every rule, and pulls no punches. This isn’t your mother’s love story, though Homegirl and Collins alike are at their best when they show us their big bleeding hearts. Ryder Collins creates a character we quickly seethe with, ache for, and follow through the fog and darkness to whatever end. Food service hipsters and gutter punks looking in the mirror, or those who lock their doors driving through the neighborhoods Collins shows us — all will want to tattoo some of these words onto their bodies.”

Stacia M. Fleegal, author of Versus and Anatomy of a Shape-Shifter, editor of Blood Lotus

“Raucous, sexy and full of verve, Homegirl! will spank you and punch you in your teeth and leave you longing for more. This is a wildly entertaining book and Homegirl’s is a hypnotic voice. Ryder Collins bravely digs into the dirt and muck of human relationships and unearths more than a few truths along the way; I will follow her wherever she wants to take me.”

“Ryder Collins’ debut novel Homegirl! blasts onto the scene like a punk rock debutante. Collins shows readers what love looks like and what love should look like. This novel has an energy that makes the rest of us look like we’re comatose. Homegirl! is the proper book for you to sling back Pibbers to and then ride fixies with securely in your back pocket. So squeeze into some skinnies, lace up your best shit kickers, and read this book.”

Dan Nowak, author of Recycle Suburbia and Of a Bed Frame

“Collins’ innovative debut is provocative and intriguing. Full of candor and darkness, Homegirl! is a real parable of modern times. Collins makes an insightful statement into the evolution of relationships in the contemporary world. A gem of a read.”

“Homegirl is a raucous and at times raunchy ride, a pure pleasure trip. Reading it is like being high on some bizarre hallucinogen and then being thrown into a party where you don’t know any of the guests and they don’t know you but it doesn’t seem to matter – they treat you well and perform bawdy acts that occasionally tip into violence while you sit at the kitchen table tapping your foot to the rhythm of the prose. The plot of Ryder Collins’ novel is tough to summarize but I’ll try: A young woman named Homegirl likes to fuck. Sometimes she fucks Punkboy and sometimes she fucks Richboy. Homegirl works in the food service business. She tries to be a writer and takes night courses. She gets pregnant, miscarries and then all hell breaks loose. This is a 21st century book; of that there is no doubt. The prose is at times discursive and wandering, like it’s written by and for people with fleeting attention spans who want to get on to the sex and violence right quick; fuck the character development shit. Homegirl is also laced with attitude – tude, as it’s known in the novel, a’ight! And &s. Vernacular language abounds but not in an overbearing way. Mostly there is strength and power in Homegirl. She’s all this and more: don’t fuck with her, she’ll fuck you over or maybe fuck you, but only if she wants to fuck. You know? A slick, slidey ridey this Homegirl – beauty!”

Fiction. Homegirl works in a cafe and doesn't know what she wants. Homegirl does live-living things like dating Punkboy and Richboy but doesn't know who she wants. A creepy creeper named Shadow knows he wants Homegirl. A Craig's List witch knows she wants Richboy. And the cafe bitches are always forever knowing they want the one you want cos that's just how they roll.... Homegirl don't care about any of them; she's out for love and vengeance and gots a Glock in her boot to prove it.

"Raucous, sexy and full of verve, HOMEGIRL! will spank you and punch you in your teeth and leave you longing for more. This is a wildly entertaining book and Homegirl's is a hypnotic voice. Ryder Collins bravely digs into the dirt and muck of human relationships and unearths more than a few truths along the way; I will follow her wherever she wants to take me." J. W. Wang"

Of all her boyfriends or pseudo-boyfriends or even friends, Homegirl liked to hang at Punkboy’s house the most. For a dirty punk rock boy covered in tatts who didn’t like deodorant and who could smell either surprisingly sexy or really really bad when sweaty, Punkboy’s house was extremely well-maintained. Punkboy’s dirty little secret was that he was a domestic punk rocker; he didn’t let many people over. If he was stoned/drunk enough, though, he’d make Homegirl breakfast or even every now and then a late dinner. She’d watch him cook and wish she had a long flowy gauzy skirt on so she could re-enact that scene from Sid and Nancy.

She wanted to die fucking; it would be the only way to go.

One night Punkboy and she’d come back to his house from the dive bar; Punkboy lived conveniently down the street and didn’t drive at all, didn’t even have a license and got around on fixies and skateboards and his own two feet, so it was also good for Homegirl cos then she didn’t have to drive drunk; although she’d drive drunk if there was even the hint of a hard cock at the end. She’d sat at his 50s resale formica kitchen table as he made some primavera with fresh veggies even. He served it with tallboys of PBR, of course, and they ate it all up, smacking drunkenly.

Usually, Homegirl tried very hard not to eat around people she was fucking or even people she was fucking attracted to. She felt like it took some of her mystery away. Made her more real and less desirable. It made her vulnerable, more vulnerable than giving head, which also made her feel vulnerable and self-conscious, and she’d hide this by deep-throating any guy she wanted and some she didn’t. Homegirl also didn’t like to eat in public. She didn’t care around Punkboy; she felt like she could do pretty much anything around him. She even let him watch her shit every now and then. It turned him on. He liked to give rim jobs.

After the primavera, Punkboy’d served cheesecake with cherry pie filling on top. Cos Homegirl was still so drunk, she tipped the plate onto herself as she tried to grab it from Punkboy’s tattooed hands. She was always always turned on by tattooed hands, but you’ve probably all guessed that already. She wiped the cake off with the paper towel she’d used as a napkin. Then she got up, clutching her stomach over the big red stain.

I’m dying; they got me, she kept saying and giggling. She thought it was pretty fucking hi-larious. She backed herself up against the wall and slid down it. Avenge me, she gasped and then convulsed, long legs splayed out in a vee.

Punkboy stared into her vee, snorted and then said, If you’re dead, I get the last Pabst.

Homegirl got her ass up right quick and said, I’ll fight ya for it. Then they were wrestling and you know what drunken wrestling often leads to.

At least I hope you do.

& if you don’t, I feel sorry for you, that you’ve lived a life so far and you’re getting older older older and never engaged in drunken wrestling or, worse, the glimmer of drunken wrestling’s never even shone in your eye. That no punker’s let you into their home and made you drunken pasta or sexted you or rubbed you raw with tatted fingers. That you’ve never smelled food service sweat and got turned on or that you never wanted to wear gauze or be around someone wearing gauze ironically or that you’ve never grabbed and tousled and then licked that food service sex sweat away all night into morning and back to the darkness again.

When Punkboy cooked, Homegirl could pretend they were a couple for reals. That this was how it was every day. Punkboy cooking; Homegirl watching, drinking, talking, listening, sharing.

Even in her imagination, Homegirl ended up getting wasted, drinking wine as Punkboy cooked. In her domestic fantasy, Punkboy never grabbed her and spanked her with that chartreuse spatula she was always eyeing. He never spontaneously threw her up on the counter and started eating her out. Even in her fantasy, Homegirl was bored with the routine and left without saying good-bye early one morning.

But making her foods and sexting her was the most commitment Homegirl’d gotten from Punkboy so far, so Homegirl wasn’t bored, and they’d been hitting it for almost three years on and off.

They’d met at the café they both worked at; Punkboy was the only one of three dudes she worked with on her first nights who’d even talked to her.

She should have known it wasn’t because he was a nice guy.

He had texted her the sweetest thing anyone’d ever said texted her, tho, just recently. I have been thinking about your pussy every day.She thought it so endearing that it was so grammatically correct.

This was a few months back when they hadn’t been hanging out regularly. To put it more simply, they’d been off. He’d had a girlfriend and Homegirl’d kinda been seeing this other “nice guy” who wanted to be a pediatrician, a proposition that made Homegirl’s clit want to jump back in its hood and hide every time his little fingers or littler wiener got near it.

Homegirl’d texted back, Just shaved my pussy and did some other things in the shower. Left ya a landing strip so you’d know where to put it.

That was as close to love as Homegirl got.

This book is tagged with: chloe caldwell, contemporary romance, dan nowak, front & centre, homegirl, juked, matthew firth, punk fiction, punk literature, romance, ryder collins, stacia m. fleegal. This entry was posted on Sunday, June 10th, 2012 at 7:07 pm and is filed under Kindle Book Store, Novels, Our Books. You can follow any responses to this entry through the RSS 2.0 feed. You can leave a response, or trackback from your own site.