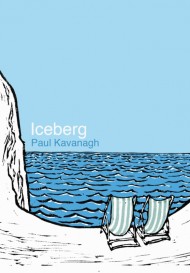 Iceberg is a timeless, illustrated tale of adventure and discovery made unforgettable by Paul Kavanagh’s incisive vision and punchy humour.

Don and Phoebe live in a grim Northern town in England where they have nothing except disappointment and a terrified dog. Until they win an iceberg. Join them on their escape from normality across Europe, Africa and Antarctica, searching for a home, a heaven and a kaleidoscope.

“To me, Iceberg is one of the truly perceptive stories of our present times. Kavanagh identifies the spectacular incongruities found in the so-called free world.”

“This is a clever, inventive and insightful take on our modern society that holds back no punches on the grim reality of life for many, but also weaves a tale of the power of dreams and the essential goodness of humanity.”

“And that is the way Kavanagh writes – with bite, wit, philosophy, and a big hunk of absurdity and it all works out to be a story whose philosophy seeps into your pores with noticing. He is a very unique artist.”

“Along comes a Paul Kavanagh, and the balance is restored, the delight in both language and storytelling is returned to the reader by a captivating high-wire act called Iceberg.”

“If Kavanagh’s first novel was Art Brut, this is a brilliantly animated series of Donald McGill cartoons, with the same scabrous innocence and scarifying pathos. But it mutates into something wilder and deeper – a joyous, kaleidoscopic vision of life. It resists both summary and analogy. It is, simply, inimitable Kavanagh.”

“Iceberg is a bare-bones myth of transportation, self-conscious in its use of language, its exposure of its protagonists’ inner workings, and its elisions. It is an odd story, and it is a familiar story. Its narrative describes the end of the world, and also reveals that world as constructed and unnecessary, artificial, letting new life grow from what collapses.”

Iceberg is the definitive apocalyptic feel-good novel from Paul Kavanagh, the mind that bludgeoned readers with The Killing of a Bank Manager. Iceberg centres around Don and Phoebe, a naïve yet loveable couple from the north of England who happen to win an iceberg. Read on as Don and Phoebe rush across Europe, Africa and Antarctica in search of their prize. Will Don and Phoebe make it? Where is humanity heading? No, honestly, where is humanity heading with all the technology and celebrities in a world where everything now seems possible but nothing really is? Just a few light-hearted questions that Iceberg doesn't attempt to answer. Part travel book, part black comedy, this three-part tale will amuse and inspire readers to take up arms, against themselves.

They stood on the side of the motorway and took turns holding out a thumb. It didn’t take long for them to find their rucksacks worked as chairs. A bag of peeled carrots sustained them.

“Every time we see a dead car we cheer,” said Phoebe.

“It’s a game. It’s called the dead car game. It will be fun,” said Phoebe.

“I thought we would be in London by now,” said Don. He wasn’t being facetious. He sighed.

“I can’t believe all these cars are passing us by and not one has stopped,” said Phoebe. It was her turn to stick her thumb into the air.

“We are doing something wrong,” said Don. He thought about asking Phoebe to show some leg. He knew that some motorists and lorry drivers liked to see some leg on a miserable day. Phoebe had nice legs.

It started to rain. They could not escape the rain. The rain cleared.

In the rising fog they sat and watched the train of cars fly past them.

“I used to think I was some kind of Gypsy boy,” sang Don.

Phoebe smiled and stood up.

A woman in a big car took them to the nearest service station. The cars were getting bigger but the roads were staying the same size. The car had trouble parking. At the service station they had a cup of tea. The woman told Phoebe that she only stopped because she wanted to find out about the hat. The woman said that she was going in the opposite direction but seeing the hat made her turn around. Phoebe thanked her. Don returned from the restroom and sipped his tea. The two women laughed seeing the hat.

By the side of the road Phoebe found a pair of discarded headphones. She picked them up as though she was unsure just what they were. Still slightly perplexed she walked over to the rubbish bin.

“Keep them. They are the new kind. They are very expensive,” said Don.

This book is tagged with: book snob, boris vian, charles haddox, ebooks, grady harp, iceberg, illustrated books, illustrated fiction, illustrated novels, kindle ebooks, neon a literary magazine, new ebooks, novella, paul kavanagh, Raymond Queneau, switchback, untoward. This entry was posted on Friday, May 11th, 2012 at 10:30 am and is filed under Kindle Book Store, Novels, Our Books. You can follow any responses to this entry through the RSS 2.0 feed. You can leave a response, or trackback from your own site.