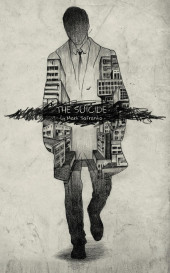 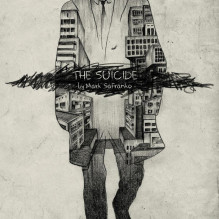 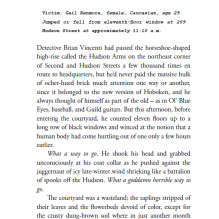 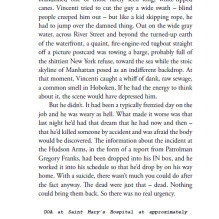 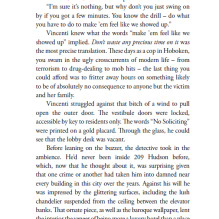 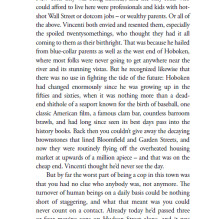 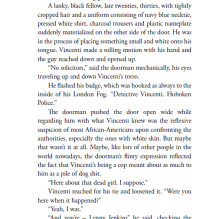 “The Suicide is a major work by one of America’s best authors. SaFranko brings together noir, suspense and deft plotting to keep the reader on the edge of his seat. This book is a must read.”

“Mark SaFranko is a master storyteller who never shies away from the darkest themes of guilt and retribution. The Suicide is a first-rate intelligent thriller, teeming with complex characters finely honed right down to the depths of their souls.”

Sam Millar (Dark Souls, On The Brinks, The Redemption Factory)

“I’m sure it’s nothing, but why don’t you just swing on by if you got a few minutes. You know the drill – do what you have to do to make ’em feel like we showed up.”

Vincenti knew what the words “make ’em feel like we showed up” implied. Don’t waste any precious time on it was the most precise translation. These days as a cop in Hoboken, you swam in the ugly crosscurrents of modern life – from terrorism to drug-dealing to mob hits – the last thing you could afford was to fritter away hours on something likely to be of absolutely no consequence to anyone but the victim and her family.

Vincenti struggled against that bitch of a wind to pull open the outer door. The vestibule doors were locked, accessible by key to residents only. The words “No Soliciting” were printed on a gold placard. Through the glass, he could see that the lobby desk was vacant.

Before leaning on the buzzer, the detective took in the ambience. He’d never been inside 209 Hudson before, which, now that he thought about it, was surprising given that one crime or another had taken him into damned near every building in this city over the years. Against his will he was impressed by the glittering surfaces, including the lush chandelier suspended from the ceiling between the elevator banks. That ornate piece, as well as the baroque wallpaper, lent the interior the veneer of being more a luxury hotel than a place where people actually lived. The building was relatively new, dating from the mid-nineties (he could remember when the frame was going up, and the old-timers who lived on nearby streets grumbling that their perennially unblocked view of New York City was being heisted), and the only folks who could afford to live here were professionals and kids with hotshot Wall Street or dotcom jobs – or wealthy parents. Or all of the above. Vincenti both envied and resented them, especially the spoiled twentysomethings, who thought they had it all coming to them as their birthright. That was because he hailed from blue-collar parents as well as the west end of Hoboken, where most folks were never going to get anywhere near the river and its stunning vistas. But he recognized likewise that there was no use in fighting the tide of the future: Hoboken had changed enormously since he was growing up in the fifties and sixties, when it was nothing more than a deadend shithole of a seaport known for the birth of baseball, one classic American film, a famous clam bar, countless barroom brawls, and had long since seen its best days pass into the history books. Back then you couldn’t give away the decaying brownstones that lined Bloomfield and Garden Streets, and now they were routinely flying off the overheated housing market at upwards of a million apiece – and that was on the cheap end. Vincenti thought he’d never see the day.

But by far the worst part of being a cop in this town was that you had no clue who anybody was, not anymore. The turnover of human beings on a daily basis could be nothing short of staggering, and what that meant was you could never count on a contact. Already today he’d passed three or four moving vans on Hudson Street alone, and it was only the middle of the month. That added up to a whole crowd of new faces. The newcomers could be anyone, from wannabe actors to members of a terrorist cell to serial killers. Yeah, the days when a man could say he knew his neighbors in Hoboken were long gone, too …

This book is tagged with: Crime novel, Mark SaFranko, the suicide, thriller. This entry was posted on Wednesday, July 16th, 2014 at 10:10 am and is filed under Novels, Our Books. You can follow any responses to this entry through the RSS 2.0 feed. You can skip to the end and leave a response. Pinging is currently not allowed.