Bundle on the Bookshelf 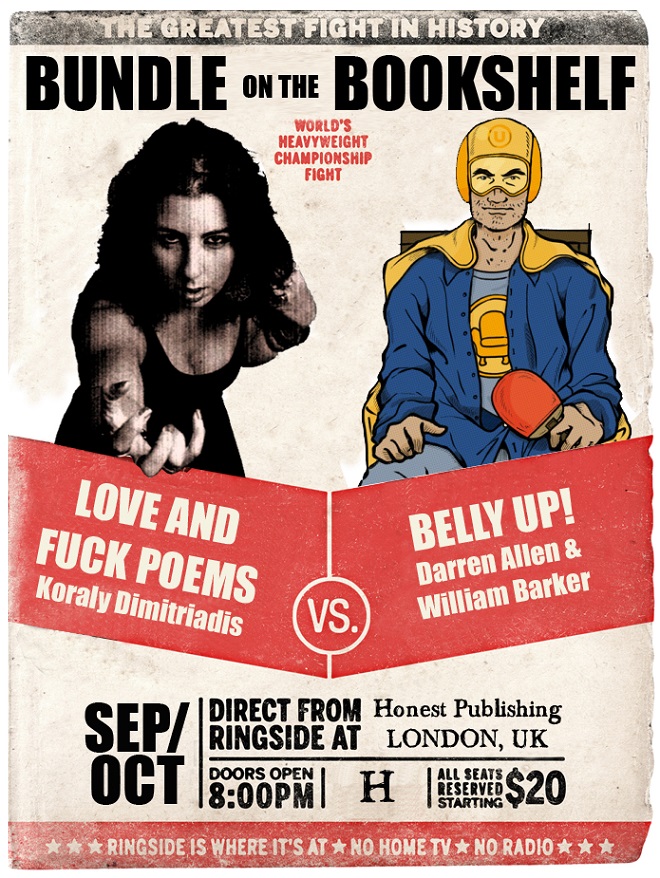 Hello. We’ve been away a while. Never mind. You probably didn’t even notice. Who would blame you…

Now that the pleasantries are over it’s nearly time for another round in the ring with a couple of Honest Publishing prizefighters. Let’s just hope you’ve been doing your skipping, drinking egg whites in your beer, and standing in the crane position on bits of wood at the seaside.

In the red corner, wearing a wedding dress and clutching a blood smeared black stiletto is Koraly Dimitriadis. This Cypriot-Australian performer and writer of poetry, prose and non-fiction explores feminism, racism, sexuality and culture in a convention-defying way that will leave you reaching for your towel and have your coach screaming ‘take a dive in the fourth, man’. Love and Fuck Poems is due for release in September.

Aaaaaaaaand in the blue corner, weighing in as an artist, activist, philosopher and media-botherer, Darren Allen has lived in Japan, Spain, Russia, the Middle East and England, and worked as a horse-groom, illicit priest and seller of shrunken heads. Among other things.

Belly Up! is a hilarious, satirical illustrated POV of the contemporary world that plagues us all. Featuring the pen work of a certain Robert Crumb, as well as The New Yorker‘s John O’Brien, Otto von Beach, and Ai, it’s a mad, butcherous, sweet, caustic carnival of surreal beauty and salt-in-the-eye satire that blends ludicrous comic strips with outrageous übernews and the occasional Jupitermoon sex guide. Available in October.

Let’s see how these two square up. Get your tickets now for September and October 2016.

This entry was posted on Sunday, June 26th, 2016 at 9:27 am and is filed under Articles, Articles, Honest Publishing Blog, News. You can follow any responses to this entry through the RSS 2.0 feed. You can skip to the end and leave a response. Pinging is currently not allowed.