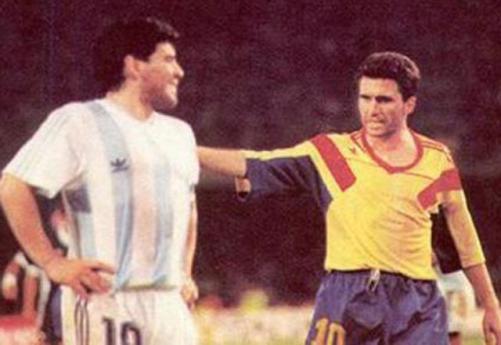 Gheorghe Hagi meant a lot to me growing up. Most English kids would associate Hagi with Romania. This was a very good thing. It would stop the beasts from laughing about orphans or communists or wondering why I was at their school. I got ten years of semi-acceptance due to Hagi. Thank you, sir; you were my right-hand man.

Away from the brutality of school, Hagi was the one reason I watched Romanian football. Sure, there were others, like Popescu, Lacatus, Dumitrescu, Raducioiu, Petrescu – those guys were all part of the Romanian Golden Generation. But there was only one Gheorghe Hagi. All English pundits feared and admired his talent. You never knew what he would do, an incredible pass, a trademark free kick, a bullish attack. But it was more than that. It was his presence.

Towards the end of his career, Hagi could be seen literally walking through games. It’s not that he was disinterested. He was storing up. Weighing up. Waiting. You could feel the expectations. He was a leader through his enthusiasm and drive and vision, was seen waving his players forwards, talking to them, putting his arm round them.

The maestro destroys Colombia in ’94

At Euro 2000, Romania had to beat England in order for Hagi to get one more game in the tournament. That was enough for the rest of the lads to push on for a victory – they wanted to give their idol one more game in the spotlight. There was such love and admiration for Hagi, that even at thirty-five or thirty-six years of age people still wanted to see him play one more match, score one more goal or produce just one more bit of magic.

Romania, as a footballing nation, has not recovered since Hagi’s retirement. It’s almost impossible to find another Hagi, especially when the Romanian football academies have all but disappeared, but they’ve struggled to fill the void, to discover a suitable leader, someone with as much skill, talent, desire. Mutu has been about as good as it’s got for Romanian football in the last decade, with Chivu a close second. But, let’s face it, Mutu is not good enough to lace Hagi’s shoes. There is no point in waiting for another Hagi – there will simply never be another Maradona of the Carpathians. We all have our moments. We all have our heroes. And Hagi’s one of mine.

This entry was posted on Tuesday, April 2nd, 2013 at 5:30 pm and is filed under Honest Publishing Blog, Writings. You can follow any responses to this entry through the RSS 2.0 feed. You can skip to the end and leave a response. Pinging is currently not allowed.