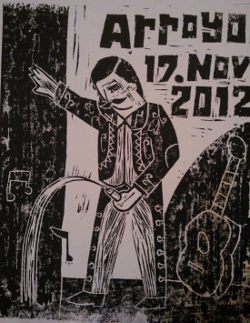 back to the barter system

i finally put an ad up in The Pennysaver.
for months, i’ve been trying to come up with
a good company name and after much deliberation
finally settled on one. so, my ad read:
Metaphysical Heating + Air Conditioning,
Artistic Craftsmanship at Reasonable Prices.
Ask For Pepe. (626)390-7765

and yesterday i got my first call. the voice
on the other end, a woman’s, sounded sexy
and desperate. maybe it sounded sexy because
it sounded desperate. a hairdresser in Covina
complaining that her recently-installed a/c
ain’t cutting the mustard and wanted to know
if i can go by and take a gander at it.

i packed my tools, jumped in my truck
and headed out. when i got there all the pretty
young hairdressers were sweating their sexy
little asses off, some trimming hair, others manning
blow dryers. i introduced myself to the receptionist
as i imagined Brando might have had he played me
in some off-broadway theatrical production
which explored the adventures of a working class
a/c poet: not looking at her but through her,
informing her that she wasn’t in the presence
of your average run-of-the-mill a/c hack…
“yes, yes, Carmela’s been expecting you. follow me…”
she walked off, shaking her fart-box.
“can i offer you a cold bottle of water?”

in the summertime i am treated like royalty,
people throwing flowers at me as i walk past,
thanking me for fixing their a/c. come winter
it’s a different story. everyone throws an extra blanket
on themselves at bed time and calls it a day. you sit
around all day waiting for the phone to ring, thumb
up your ass. if you don’t learn to put away
your nuts, you’re fucked…

Carmela was out back washing some guy’s hair. she looked
more like a madam in a whorehouse than a hairdresser.
she smiled what i perceived to be a flirtatious smile.
already, i thought, trying to work me on the price. “nice
to meet you,” she says, toweling her manicured mitts.
“follow me. the chingadera is over here…”

i followed her to where the chingadera hung high above
on a wall. some hack, i discovered, had installed it
a couple of weeks prior but the damned thing didn’t work
from the gate. Carmela has kept trying to get ahold of him
but he disappeared. the a/c wasn’t of sufficient capacity
to address the heat load in the beauty shop. sure, the hack
went by what’s required in terms of square footage
but he forgot to account for all the variables, ie,
blow dryers goin’ full blast, a roomful of moving bodies,
not to mention the large windows up front which
might as well be a pair of 10’x10’ magnifying glasses.

“it’s fricken hot in here. we keep losing customers.
can you help us out?” she pleads. the bad news is:
she has to install an entire new system with properly
laid out duct to cool down the whole shop. i let her
have it and she just about shits her pants.
“how much is that gonna cost me?”
“you’re looking at around 5 g’s, parts and labor
included. along with a 5 year warranty. not 90
days or out the driveway, whichever comes
first, like the last guy…”

she asks if i can accommodate payment plans
but i ain’t a god-damned charity
and don’t really wanna be there in the first place
let alone bankroll her a/c job
i’m trapped and trying to stay afloat
just like everybody else – child support, rent, light, gas…
“we might be able to work something out.”
“whatchu got?” she says.
“let me take home 3 of your girls for the night
and i’ll knock a thousand bucks off the price…”
she looks in the direction of her hairdressers,
her eyes lost in deep consideration…

nights of our lives

there’s a window across the alley
where we live, a one-way 8 foot by 8 foot
window of a business that specializes
in the making of dental implants, bridges, etc.
and some nights when the ol’ lady
and i are going at it, our fights spill out
the front door and into the alley

“let’s see how many bitches
you’ve been text messaging!” she yells,
holding my cell phone in her hand
in her underwear and bra
‘neath the glorious full moon
of Ontario, California

and me, barefoot and in boxers: “gimme
that god-damn cell phone!” i spit back,
grabbing her by the wrist
aimin’ to drag her ass back inside
wondering what the workers behind
the one-way window, that big screen, are
snacking on as they look on at the free
better-than-tv live entertainment

trying to impress my English Professor
girlfriend with my plain and simple style
i submitted a short story weeks ago
and had almost forgotten about the damned thing
when i got home from work this afternoon
and found a large manila envelope stuffed in the mailbox
i opened it immediately, thinking, shit, they’ve finally accepted me!
and there it was: untitled, bleeding to death, slashed
unrecognizable by her red Professor’s pen
with notations and corrections and commentary
alongside its margins… what has she done to you?
i said aloud, holding it paternally in my hands, after the ass-kicking
and long journey back home where it had lived
comfortably in a drawer for 7 years… 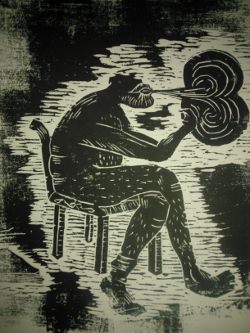 i walked up to the cash register at the am/pm
corner of Holt and San Antonio, Pomona, California
and placed my items on the counter:
a bottle of gatorade, a large bag of doritos,
some chewing gum and a 3 pack of condoms

walking out i caught a glimpse
of what i had become reflecting back at me
from the automatic glass door
there i stood: 37 years old, terrified, ignorant,
ex-panhandling-pornoholic, overweight,
ill-read, neurotic, lazy, lustful, a ship-wreck
drifting toward my mother’s shore…

god, i thought, taking off my shirt, couldn’t i just find
a nice girl who might let me fondle her every now and again
a fuck friend to save me the $100
a days work crawling around in a hot attic with a bad knee
it’s always so easy for her to meet someone new
or reconnect with someone from her past
someone she more than likely had waiting in the wings…
i’d take her to a movie and afterward at the bookstore
across the street buy her a copy of The Neon Bible

i’d always wanted to fuck a black girl
and hitting it doggy
ten or 12 pumps deep
out of shape and short of breath
my troubled pecker began to go limp
i asked her to help me out
to suck on it a little
but it was sex or head, not both
and i didn’t have another $40 to drop
so i suggested she tickle my balls
or something which she did
to no avail: held it like a wounded sparrow
in the palm of her hand

my name in lights

it hasn’t been as hot a summer as i anticipated in the Inland Empire. still, i am in demand and working 40+ hours a week at the steel mill while other men loiter in Home Depot parking lots scroungin’ for work… on top of that, i’m up to my ass in sidework thanks to word-of-mouth and the ad i recently placed in the Pennysaver.

i flip through the pages of the Pennysaver regularly to get a gander at my competition. i see i will have no problem making a buck in this inclement economic climate. not with companies like Antonio’s Air Conditioning to contend with. Antonio obviously lacks creativity and imagination as well as ontological know-how… guys who name their company after themselves bore me. guys who name their company after their ol’ lady, shit — that fuckin’ sickens me… Margarita’s Heating + Air, for instance. who the fuck is this Margarita, anyway? and what the hell did she do that was so special to get her name up in lights on some work truck riding all over town? does she crawl around in the attics of hell up to her ass in fiberglass insulation in temperatures upwards of 140 degrees alongside her man?

what’s called upon is something timeless and transcendental!

i didn’t choose the name Metaphysical Heating + Air Conditioning so much as it struck me in the head one day while i was driving along the freeway, like a lightning bolt from heaven cast by the gods of air conditioning…

i was sitting on the throne this morning, flipping through the Pennysaver, talking the aforementioned shit about my competition, when my stupid smart phone rang:

“this is Wanda calling from doctor Bob’s office. just wanted to let you know that the test came back negative. you’ll be relieved to know that what you’re suffering from is not an internal hemorrhoid. it’s just a fissure, a cut, caused by an unusually extraneous bowel movement more than likely… if you take the fiber daily and apply the ointment you should be all healed up in no time.”

so, there you have it: a torn asshole. probably caused by those methadone shits of my mid to late 20s… i’ve been living with it for 12 years now. all this time i’ve been on suppositories under the impression that it was a hemorrhoid. i’ve learned to live with the pain: it’s felt like i have a knife shoved up my ass 24/7. the pain has been so great that it’s made me pick up my pen and write poetry…

i had been going to my primary doctor but he never even bothered to peek up my butthole to take a gander. he just kept writing scripts for extra strength suppositories and called it a day. on to his next patient… the hack!

“thank you so much, Wanda. i’ll be sure to follow the doc’s orders on this…”

i  hung up. then i heard my ol’ lady bitching about something in the other room…

her x husband bounced the child support check again, she informed me. and her cell phone took a dump. out of commission. after the week of hell her and i have just put each other through, i’m sure this is the last thing she wants to deal with. she just came back home after a 3 day stay at her mum’s. sure, we had make-up sex and talked a little but nothing ever really got resolved. it’s true that i’ve been dragging my feet for months, letting her do all the dirty work – domestically and emotionally. i guess it’s back to the drawing board. shit, maybe even another stint in family therapy? that’s the last thing i want! it’s all so strange: one day we’re at each other’s throats, calling each other’s mothers names, like PUTA, PERRA and PINCHE, and the next we’re in the sack whispering dirty things in each other’s ear…

“it’s gonna be alright, baby boo,” i said, not really sure if i BELIEVED that.

then, my stupid smart phone buzzed. i picked it up and saw an email had just come through. a publishing outfit from across the pond notifying me that they’d decided to publish a handful of my woodcut prints on their website. i clicked on the link which took me to their page and there it was: MY NAME IN LIGHTS. i kept it to myself, this bit of miraculous news, thinking that it might not be what she needed to hear just then. well, yes, it’s a bad start of the day for some, i thought, wiping my ass, but for others it’s not so bad…

This entry was posted on Wednesday, August 7th, 2013 at 11:00 am and is filed under Honest Publishing Blog, Writings. You can follow any responses to this entry through the RSS 2.0 feed. You can skip to the end and leave a response. Pinging is currently not allowed.