“If I’d learnt one thing from travelling, it was that the way to get things done was to go ahead and do them. Don’t talk about going to Borneo. Book a ticket, get a visa, pack a bag, and it just happens.”― Alex Garland, The Beach

Picture the scene: aboard a creaking ship with five thousand miles between you and the port you set sail from, suspended hap precariously above a gritty sea bed, eyes straining towards the shoreline of an unexplored foreign land; not passively dreaming of adventure, but living it. 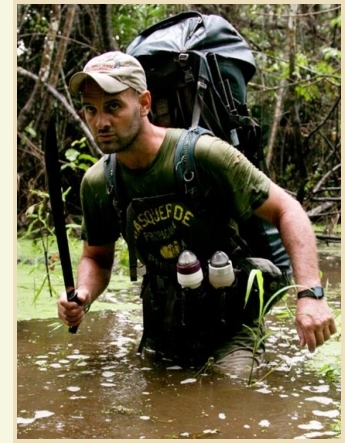 What a day it would have been to stand in the boots of the man who discovered the New World; Francis Drake, unofficial patron saint of the traveller. What it would be to live a life that filled books, and will forever be remembered for being extraordinary.

It is what a proportion of us ache for; to do something nobody has successfully done before, or to go places thought to be impossible to venture to. To be regarded as being someone who is exceptional; if only by ourselves. It is that longing that has lead countless of us to wander the far too well-travelled road, searching for Alex Garland’s Beach, or the sites where the legendary explorers first stood on unknown soil. It is that feeling that continues to push both men and women to achieve the unthinkable.

And in this exhausted modern age, where much has been done time and time before, the unthinkable is the minimum of what must be achieved to be acknowledged at all. With countless expeditionists braving even the highest mountains, and completing them in world-record time, it often seems that there is not much is left for the rest of us. But that’s where we are wrong. A new species of wanderer has emerged: one who seeks out the impossible and shows us how it’s done.

Take Alex Honnold for example, a forefront participator of ‘free solo’ climbing (that is, scaling sheer mountain walls without a rope, safety equipment or, incidentally, a second chance). With only his bare hands to rely on, and a pair of climbing shoes, if he falls, he dies. Honnold’s achievements have set many mountain climbers on a back limb, as their gruelling hours scaling heights as terrifying as 7,000 feet have been pushed to second best by a 27-year-old Californian with nothing but a vision and a very strong grip.

But inspiration for this new breed of traveller is not limited to pushing conventional sport boundaries. More in the spirit of the traditional explorer, and Francis Drake himself, Englishman Ed Stafford made history in 2010 by becoming the first man to walk the entire 4000 mile length of the Amazon River, from source to sea.

The challenge in this expedition was, unbelievably, not just the distance of the trek, but the perils that accompanied it. Stafford was up against poisonous insects and snakes, bogs and hostile native inhabitants. At one point during the two-year expedition, Stafford and his Peruvian companion Cho were under attack by machete-wielding members of the Ashaninkan tribe. During another memorable portion, Stafford was believed by indigenous tribe members to be the fearful mythical figure ‘Pela Cara’, or ‘face peeler’, and was captured and held prisoner. All in all, a journey fit for one astounding adventure novel.

So I come to this conclusion: if these men are still finding fresh experience in a thoroughly analysed world, surely there is enough out there for the rest of us. Maybe we can’t all be Francis Drakes, legal pirates uncovering new corners of the globe in a 150-ton galleon. But, if we delve deeply enough, I think we can still find plenty to discover. Even now, there exists vast stretches of unexplored ground in Borneo, Papua New Guinea and the Congo, just calling to be traipsed through. It takes an exceptional leap to become that exceptional first person, but, sometimes, it’s just worth the risk.

This entry was posted on Saturday, August 3rd, 2013 at 9:06 am and is filed under Articles, Honest Publishing Blog, Writings. You can follow any responses to this entry through the RSS 2.0 feed. You can skip to the end and leave a response. Pinging is currently not allowed.