Exclusive excerpt from Vorrh 2 by B. Catling

OL LONGFELLAR, ADAM AND A PREVAILING BREEZE: AN EXTRACT FROM THE ERSTWHILE, VORRH 2

Execution techniques vary widely and cultural preferences do not always travel well. Such was the case in Essenwald. The twentieth century’s fashion for enclosing the act and making it clandestine and elitist was not well-receive d among the ancient tribes of the African continent. They wanted, demanded something more theatrical, lavish in its spectacle and democratically available to all. END_OF_DOCUMENT_TOKEN_TO_BE_REPLACED

Another Christmas. This time it’s with books. 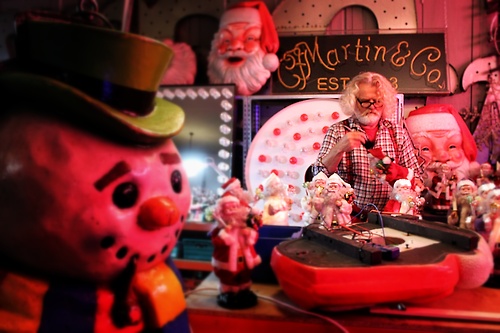 And it’s Christmas. So you sit around a tree, and there are not enough chairs for everyone. Someone gets uncomfortable on a floor, or an occasional stool. Everyone is seated at a different height, not quite fitting in a photo. You stretch your arms as far as they will go…SMILE…nobody smiles. Except you. Granny twiddles her thumbs and stares at her skirt, mother runs to the kitchen, because, FUCK, something is burning. Dad mumbles about gadgetry-it was different when you could shake it like a Polaroid picture. Everyone wishes for a different type of potato. Mashed or creamed or roasted or all of them. Never enough. Brothers and sisters and neighbours and friends wait. They wait for the presents. You had to buy presents, even if you didn’t want to. Everyone wants a present.

END_OF_DOCUMENT_TOKEN_TO_BE_REPLACED

The Vorrh To Be Unleashed At Pitt Rivers

Honest Publishing is proud to announce the launch of THE VORRH by BRIAN CATLING at the PITT RIVERS MUSEUM in Oxford on 15 November 2012, 6.00pm.

THE VORRH is Brian Catling’s long-awaited epic fantasy creation, the first novel in an astounding new trilogy. The launch features an exclusive reading by Brian Catling. There will also be a special guest appearance by renowned fantasy writer ALAN MOORE. He is to announce the winner of the prize draw, who will receive an original and collectible piece of artwork by Brian Catling.

BRIAN CATLING is an artist, sculptor, writer and poet, whose works include A Court of Miracles (2009), The Stumbling Block (1990) and The Blindings (1995) published by Book Works. He is Professor of Fine Art at the Ruskin School of Drawing & Fine Art, University of Oxford and has performed and exhibited at numerous galleries and venues including the Serpentine, the ICA, and Matt’s Gallery.

ALAN MOORE has written the foreword to The Vorrh. He is a celebrated British writer of comics and graphic novels, particularly well-known for his works Watchmen, V for Vendetta and From Hell.

The PITT RIVERS MUSEUM is a department of the University of Oxford and a world-renowned centre for teaching and research. The museum was founded in 1884 when General Pitt Rivers, an influential figure in the development of archaeology and evolutionary anthropology, gave his collection to the University. Today it displays over half a million archaeological and ethnographic objects from all parts of the world.

B. Catling on ‘The Vorrh’, Alan Moore, J.R.R. Tolkien and More

Dear readers, we have a very special treat for you. Writer, artist, filmmaker and University of Oxford Professor B. Catling has given us an exclusive interview on his new fantasy novel The Vorrh, Alan Moore, Tolkien and much more. Enjoy. END_OF_DOCUMENT_TOKEN_TO_BE_REPLACED

The Vorrh – B. Catling

As featured in the pages of The League of Extraordinary Gentlemen. With a foreword by legendary writer Alan Moore.

Prepare to lose yourself in the heady, mythical expanse of the Vorrh.

In B. Catling’s twisting, poetic narrative, Bakelite robots lie broken – their hard shells cracked by human desire – and an inquisitive cyclops waits for his keeper and guardian, growing in all directions. Beyond the colonial city of Essenwald lies the Vorrh, the forest which sucks souls and wipes minds. There, a writer heads out on a giddy mission to experience otherness, fallen angels observe humanity from afar, and two hunters – one carrying a bow carved from his lover, the other a charmed Lee-Enfield rifle – fight to the end.

Thousands of miles away, famed photographer Eadweard Muybridge attempts to capture the ultimate truth, as rifle heiress Sarah Winchester erects a house to protect her from the spirits of her gun’s victims.

In the tradition of China Miéville, Michael Moorcock and Alasdair Gray, B. Catling’s The Vorrh is literary dark fantasy which wilfully ignores boundaries, crossing over into surrealism, magic-realism, horror and steampunk.

Click here to order a copy of The Vorrh.

Welcome to the surreal world of The Vorrh. END_OF_DOCUMENT_TOKEN_TO_BE_REPLACED

Honest Publishing recently spoke to writer and comic book legend Alan Moore, creator of critically acclaimed works including Watchmen, V for Vendetta, and From Hell. We’d like to thank Alan Moore for his incredible generosity and for being very open and honest with us.

In the first part of our interview, we picked his brains on the shape of publishing, writing as a full-time occupation, and his take on the Kindle. END_OF_DOCUMENT_TOKEN_TO_BE_REPLACED